"For the last 20 year period I've been working with ideas conceived as a child." -Red Grooms

Have you ever started a project and find it is more consuming than you anticipated? Early last year, as the weather was warming, a large 48”by 60” canvas came my way. It sat for a few weeks until the weather was perfect to paint outside. On a designated day, the deck was prepared for the project because the studio is too small to handle big paintings. Inspiration got the paint moving but like some efforts it just did not work out.
The big oil painting had lots of thick paint piled on but not in a pleasing artistic manner. It was stored in the studio through the next year. Again the large surface came out for another go. This time the studio was made more spacious and the canvas was set on risers. To paint the lower third I sat on a small bench and later got down on the floor with paint brush in hand. For the first time I experienced a sense of the effort and great work applied to the ceiling of the Sistine chapel. I was humbled my meager attempts. Again the outcome was unsatisfactory and I tucked the big canvas away for a later day.
In early autumn this year the painting called me back for another attempt. Some furniture was removed from the studio making more space for you know what, yes, the big canvas. This time the tea and music fit perfectly. The mood was right. Now to get the previous under paintings to work with me. The stormy sky appeared with some previous texture showing. Soon mist and trees played nicely together creating a mysterious sense of peace. Next I revisited the foreground, not too much, just a little defining of shapes.

Wow, could it be that all elements finally came together? Yes, after more than a year and three starts Highland Ridge with its forest moods through texture and color emerged. Visitors to the studio have confirmed my positive feeling for this work. I am so glad I did not destroy the canvas out of frustration. St. Francis is reported to have told us, “Have patience with all things, but, first of all with yourself.”

Thank you for visiting my blog on the life of an artist. Please be sure to check the website, www.joelellisart.com, and work on the Xanadu Gallery in Scottsdale Arizona.
Joel
Posted by Joel F Ellis at 10:56 AM No comments: 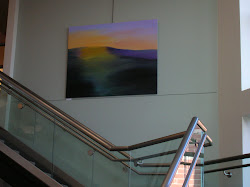 Joel F Ellis
Joel F Ellis, artist and educator, winner of enough awards to feel validated by public viewing, including Greater Michigan Artists Exhibition and selected for Michigan Governor’s Residence Art Project 2011. I love color, spontaneity, places like dunes and forests. I maintain a website, www.joelellisart.com , but also feel the web log is a chance to comfortably share the intricate and sometimes extraordinary experiences in the process of creating art.